Well, it's all over. Except, that is, for the pain, the tiredness, and the wonderful sense of achievement. There is something very special about crossing the finish line of a your first 10K. The whole day was very exciting. We woke up early, and had a light breakfast, then met up with the rest of the team at Green Park. I cannot begin to tell you how it feels to be standing in a sea of people, all waiting to set off.

Scissors was by my side the whole time. He has run 8 marathons, so this wasn't going to be a challenge for him. He kept shouting at the crowd, urging them all to cheer us on - very amusing!

MrsRRD is there, at the 2km mark, along with the rest of the support team. I probably looked quite fresh at that time! Not so later on, as I wind my way through the streets of London, onwards, ever onwards.

And then I reached the 8K mark - uncharted territory for me. The pain in the hips was slowing me down, and my leg felt like jelly. Scissors turned to me (running backwards as he did - show-off):

"Do you want to spend a whole year, until the next BUPA 10K, wishing you had got in under your target (1 hour 20 minutes), or do you wish to spend the next year being pleased you did?", he asked me. Hmmm, tough one. My brain told my legs to speed up. My legs told my brain to sod off, then grudgingly stepped up the pace.

I have a GPS watch. I bought it with money from my birthday (yes, I still get money for my birthday, what of it??) It tells me exactly how fast I am going, how far I have gone, what my pace is. I have been using it to plan my race, and to optimise my training. I charged it up, so that it would be ready for race day, so that I could keep to just under 8-minute kilometres.

I left it at home.

So, I was dependent on Scissors to keep me on pace. If he is telling me I need to pick it up, then pick it up I will. And I did. Somehow, I managed to find those extra few muscle fibres, the ones that hadn't given up the ghost, and put them to work. I pass MrsRRD again, pushing myself harder and harder.

And there it is in the distance - the finish line! I have 400m to go, and I start to sprint, with Scissors muttering, "There's no grey - it's either black or white." No idea what he meant by that, but the sight of the finish line getting closer and closer spurned me on, faster and faster.

And I'm through!! I turn to Scissors, gave him a big hug, then asked the question? Was I in or was I out? He looks at his watch, and tells me the news: 1 hour 16 minutes 1 second!

And then, in true form, we meet everyone else, and have a picnic in Green Park.

What's next? Something very exciting, but I'll keep that for another day!

Thank you to all of you for all your support. Without you watching me, I would never have managed this. 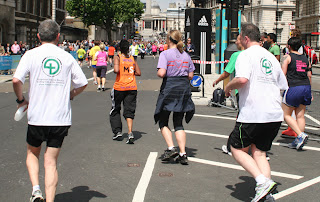 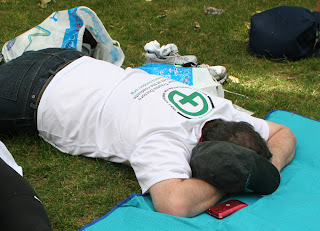 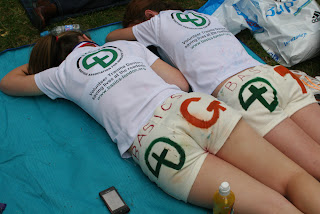 A Life In The Day Of A Basics Doc

Promote your Page too

RapidResponseDoc
South-East, United Kingdom
I am a BASICS Doctor. I am one of a select group of doctors who give up their time to provide medical care at the roadside. My son has nagged me to put some more details in, so you can blame him. I am married, and we have 5 kids. My wife is a photographer, and I'm only occasionally jealous of what she does! Our eldest wants to be a doctor. I'm trying to persuade him to find a proper career. The only problem with that is he sees how much I enjoy what I do. Our daughter, second in line, is the artist of the family. She will be VERY famous when she is older, I have no doubt. Our younger three boys are, fortunately, too young to have to worry about careers - much more interested in TV and computer games than anything else - ah, the joys of youth!! I am an A&E Consultant of a fairly large District General Hospital. This helps me keep up my trauma skills, as we are very close to both the M1 and the M25.