Diogenes - The Man Who Lived In a Tub

I am called to a man 'stuck in his house.' What on Earth??? I arrive to find a whole heap of ambulance crews and fire crews, milling around an end of terrace house. I approach one of my colleagues and ask what the problem is, and he just shakes his head and points me towards the open front door. 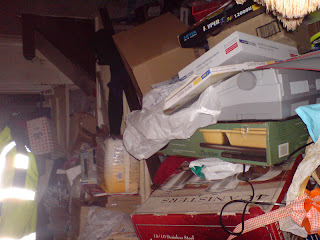 I walk slowly to the door, with trepidation. Peering through into the dark entrance hall, I am struck by the mounds of books, boxes and bottles, stacked floor to ceiling. There is a narrow passageway. "Hello," I call timidly. "Hey, RRD! We're in the front room. Careful as you come in."

I look more closely at the piles of rubbish as I pass - milk cartons from 1987, boxes of cereal and, strangely enough, Mcvites biscuits. Telephone directories by the dozen, a television, numerous radios from way back when. A motherboard. A box of saucepans. I walk slowly and carefully along a corridor which would only fit one person.

As I turn the corner, into the front room, I am stunned by what I see. This is no front room. This is a maze, a twisting, turning passageway through more rubbish; books, more milk cartons, some still full of a brown, evil looking liquid that many years ago was milk, magazines, all piled high to the ceiling. I look down; I am standing on paper and more rubbish. Faintly, I can hear the rustling of other visitors, much more used to this sort of environment than I. I shudder to think what else lives here. 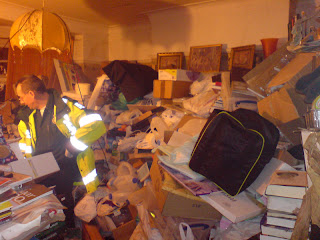 And then I turn the last corner, and see, seated in a chair in the eye of this storm, the king. That's my first thought, as I see him sitting there. The chair, large and ornate, his throne. The space around him cleared of detritis, at least for a few inches, enough for one person to get round him. And the way he sits, upright and proud, as if the scene before him is that of his adoring subjects, not a rat-infested landfill.

I have been called because Jim has become unwell. He has developed a temeperature and a nasty, rattling cough. This isn't very surprising. I am told by the ambulance crew that Jim hasn't moved from the chair in which I now see him sitting for the past 3 years. 3 years, sleeping, eating, everything in that one chair. He has no legs; they were amputated 3 years before, because of gangrene. Yet, he tells me proudly that he walks 2 miles every day, but has been hampered by the chesty cough for the past 2 or 3 days. Not hampered by the lack of legs, nor by the lack of cleanliness.

I am confused: how can someone live in this way? Who cares for him, feeds him? And then I am introduced to his carer! A lady in her early 50s, who looks after Jim, provides him with his daily needs of food and water. She tells me she lives three doors down from him, and comes in three times per day to "look after him."

Who knows what she gains from this symbiosis, this strange relationship. All I know is that Jim is terribly unwell, and needs to be in hospital. But here is the quandry: how do we get him out? The ambulance crew are very worried about moving himm off of the chair - he is so frail that they are concerned even the slightest movement would be the end of him. I don't disagree with them, to be honest! Also, we can't move in the house because of all the rubbish. Everything is so precariously stacked that knocking into any of it might bring the whole lot down on us.

The fire service chief asks to have a chat to me. I make my slow way outside, into the clean, fresh air. I gulp hungrily, not realising until I am outside just how fetid the atmosphere is in the house. "Is he ever coming back here?" he asks me. I'm not sure, and I say so. His idea: to take out the whole front window frame, and get him out that way. "Will you put it back afterwards?" I ask. Of course, the answer is "No." And here is my problem: if we do that, if we make his house uninhabitable, he will spend the rest of his days in a hospital or in a Nursing Home, somewhere he clearly does not want to be. If we don't, he could die as we take him out. I make my decision. We are going to get him off the chair, put him on an ambulance carry chair, and take him out of the front door. I brief the staff, and we prepare.

Jim is lifted off his chair. Well, actually, a lot of the chair comes with him. The fabric adheres to his flesh. He is then carried through the maze of rubbish, of his personal belongings, to the waiting ambulance. His house is intact, ready for him if he ever is able to leave the hospital. His carer is in tears.

And so to the odd title of this post. Jim suffers with Diogenes Syndrome, involuntary self-neglect and hoarding. I have seen only one other in my career, and she died about a week after being admitted to hospital. Diogenes was a Greek philosopher, a beggar who made his home in the streets of Athens, and who made a virtue of extreme poverty. He is said to have lived in a large tub, rather than a house.

Jim died about an hour after arriving at the hospital.
Posted by RapidResponseDoc at 18:56

A Life In The Day Of A Basics Doc

Promote your Page too

RapidResponseDoc
South-East, United Kingdom
I am a BASICS Doctor. I am one of a select group of doctors who give up their time to provide medical care at the roadside. My son has nagged me to put some more details in, so you can blame him. I am married, and we have 5 kids. My wife is a photographer, and I'm only occasionally jealous of what she does! Our eldest wants to be a doctor. I'm trying to persuade him to find a proper career. The only problem with that is he sees how much I enjoy what I do. Our daughter, second in line, is the artist of the family. She will be VERY famous when she is older, I have no doubt. Our younger three boys are, fortunately, too young to have to worry about careers - much more interested in TV and computer games than anything else - ah, the joys of youth!! I am an A&E Consultant of a fairly large District General Hospital. This helps me keep up my trauma skills, as we are very close to both the M1 and the M25.